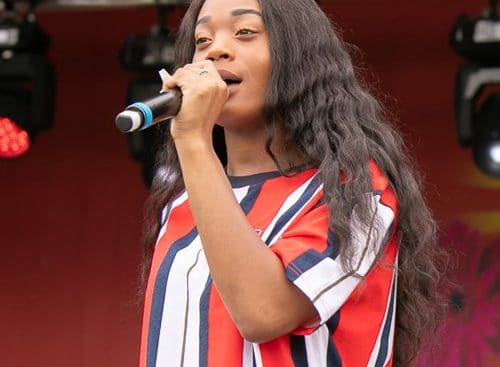 Simmer Down Arts Newsletter May 2021

Over the past few months, Simmer Down has created two free livestreams in our Lock-Down Lounge series.

Motown in Dub was a spectacular live show featuring some of Birmingham’s finest vocalists and stellar musicians. It blended classic Motown hits with upbeat Roots Reggae in a steppers Dub style, plus a whole heap of upbeat festive support acts. MarCus-Bee and Shirlee-Bee hosted the event, playing the very best in 70s disco funk, soul and roots reggae classics.

Both of these are still available to watch on our YouTube page: https://www.youtube.com/channel/UCHgykf0hcL0bDBnwzvxhlnQ

Birmingham Reggae Royalty is a new exciting commission by Simmer Down Festival, which brings together 5 music creators and the internationally acclaimed music producer Simon Duggal in a project, which whilst paying tribute to the City’s past reggae luminaries, blends and mixes musical genres to creates a future-facing global reggae sound that reaﬃrms Birmingham’s position as the epicenter of reggae music outside of its birthplace Jamaica. The project will culminate in a new piece of music and an accompanying video, which will be performed live on the main stage at Simmer Down Festival 2021.

Conceived and directed by Mukhtar Dar on behalf of Simmer Down Arts, Hidden Hands was funded by the Arts Council England as part of the Emergency fund. It is a musical tribute, which brings together leading artists from Birmingham’s diverse communities to highlight, that in the UK members of Black, and Asian communities are four times more likely to die from Covid-19.

“This project came out of a traumatic set of personal circumstances which have been echoed by many others in our communities. Within a week of the UK national lock-down, my father lost his sight and his hearing; he couldn’t walk and was rushed into hospital. We couldn’t visit him, he couldn’t call us and we lost all contact with him. At the same time, my sister in-law’s father died in the back of an ambulance, she is a doctor and her father was a doctor – he died from Covid-19.”
The project assembled a creative team including singer songwriter Dave Rogers from Banner Theatre and Puerto Rican scholar, poet and activist, Antonia Darder. Dave Rogers and Antonia Darder wrote the lyrics in consultation with Mukhtar Dar.

“The song speaks to the many Black and Asian people who have played a vital role in providing NHS services during the pandemic. It calls out the institutional racism responsible for the disproportionate impact on Black and Asian workers and celebrates the “heroes” who risked their lives to care for others, including politicians who praised them, yet disgracefully failed to provide adequate frontline protection.”

The lyrics were then emailed to some of Birmingham’s outstanding and prominent vocalists who recorded the verses on their personal laptops whilst in isolation during the lock-down. These singers and stellar musicians all came from the target communities that have been impacted by COVID-19, and they were only too keen to come on board as each one of them had personal accounts of how the virus has aﬀected their families and friends. From the Grammy-award winning Selwyn Brown (Steel Pulse), to chart-topping Errol Reed (China Black), and one of the most prominent Bhangra vocalists in the UK, Shin (DCS), to the young up-and-coming Janel Antoneshia.

The link to the song can be found here: https://www.youtube.com/watch?v=7lOO6TkLLrc

Create a Menu
Simmer Down Arts
Tel: +44 (0) 121 296 5235E-mail: info@simmerdownfestival.com
NEWSDonationsGet In TouchPrivacy Policy
©2021 Simmer Down Arts   •   Website By SEO Nuts
We use cookies on our website to give you the most relevant experience by remembering your preferences and repeat visits. By clicking “Accept All”, you consent to the use of ALL the cookies. However, you may visit "Cookie Settings" to provide a controlled consent.
Cookie SettingsAccept All
Manage consent

This website uses cookies to improve your experience while you navigate through the website. Out of these, the cookies that are categorized as necessary are stored on your browser as they are essential for the working of basic functionalities of the website. We also use third-party cookies that help us analyze and understand how you use this website. These cookies will be stored in your browser only with your consent. You also have the option to opt-out of these cookies. But opting out of some of these cookies may affect your browsing experience.
Necessary Always Enabled
Necessary cookies are absolutely essential for the website to function properly. These cookies ensure basic functionalities and security features of the website, anonymously.
Functional
Functional cookies help to perform certain functionalities like sharing the content of the website on social media platforms, collect feedbacks, and other third-party features.
Performance
Performance cookies are used to understand and analyze the key performance indexes of the website which helps in delivering a better user experience for the visitors.
Analytics
Analytical cookies are used to understand how visitors interact with the website. These cookies help provide information on metrics the number of visitors, bounce rate, traffic source, etc.
Advertisement
Advertisement cookies are used to provide visitors with relevant ads and marketing campaigns. These cookies track visitors across websites and collect information to provide customized ads.
Others
Other uncategorized cookies are those that are being analyzed and have not been classified into a category as yet.
SAVE & ACCEPT